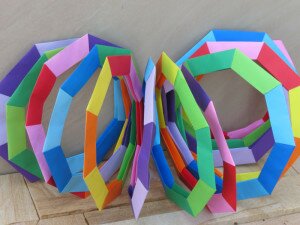 The origami spiral is yet another beautiful modular origami by Tomoko Fuse. Because of how colourful it looks, I had tried this out a long time back – about 3 years back, when I was pretty much a newbie to origami. While folding the modules was pretty easy, I just couldn’t figure out how to connect one unit with the next. And finally gave up.

Now, since I have gained a little more experience, I gave it another try. It still required some figuring out, but I was able to get the principle at last

And have been having fun ever since!

I wanted to make a spiral with at least 10 rings in it. Since each ring has 8 modules, I needed at least 80 modules. I added a few more, till I had 100 modules in all and finally set about assembling the modules. So now, based on the number of modules used in a model, the spirals is my biggest project!

The basis for the spiral is the ring which is made from 8 modules. The ring itself will make a good Christmas decoration I think. It would be better to use 80 gsm paper, though this might make it a little difficult to assemble the modules. If making the spiral, I would suggest 60 gsm origami paper. Colourful paper is best for the spirals, resulting in some very colourful and attractive origami.

Be sure to glue the joints, especially for the spirals – rest assured, everyone who sees it will want to handle it and you will end up with many modules that have come undone, unless it is glued in place.

I had used 3-inch squares for making the modules and ended up with a spiral that measured about 6 inches in diameter – a little too big to be used as a slinky! But in spite of that, everyone who has seen it has attempted using it as a slinky!!