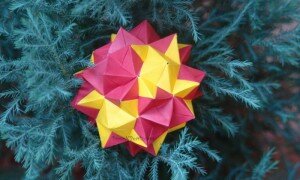 The diagonally folded triangular unit solids is the last of the polyhedra described in Tomoko Fuse’s ‘Unit Polyhedra Origami’. The model I have folded is the 60 Unit Variant Cube star, consisting of 32 triangular pyramids and 6 square pyramids. The triangular pyramids are quite stable but the square ones are not quite that stable. But they are anyway, surrounding by the triangular pyramids, so the overall structure is very stable. I found that assembling [Continued..] 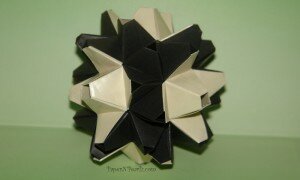 The Double sided Convex Hexagonal Ring Solids is another series from Tomoko Fuse’s book ‘Unit Polyhedron Origami‘. The book describes a series of polyhedra that can be quite easily completed. The double-sided convex hexagonal ring solid modules are quite easy to complete. I found the assembling to be much tougher than the usual modular designs from Tomoko Fuse. The little tabs that need to be inserted into the next tab required the use of a [Continued..]