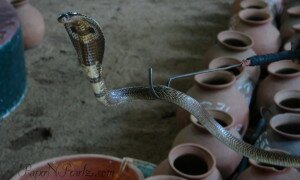 After a long time, we have had a long weekend and my daughter has been quite excited about it! She had already prepared a list of things to do during this weekend. At the top of the list was a visit to the zoo. So that is what we did on Saturday morning. The Madras Crocodile bank is a couple of hours journey from our house and is a major attraction here. It is one of the largest reptile zoos in the world and houses crocodiles, alligators and gharials. Also at the bank are snakes, both poisonous and non-venomous. So that was our destination and we set off as soon as we could (which was past 10 in the morning!), with bags packed full of chips and drinks and biscuits, with a camera and multiple photos with superior photo-taking abilities!

I had already read about the bank and knew that snake venom extraction was performed live here. I have this morbid fascination towards snakes and that was the first place we visited. But unfortunately, major disappointment there! The venom extraction was temporarily closed and would restart in a month’s time. So we couldn’t see that. But we did see a lot of very poisonous snakes including the King Cobra, the Spectacled Cobra and the Russell’s Viper. The men who do the extraction were very friendly and though they couldn’t demo the extraction, they were very happy to talk to us about the snakes. They told us hair-raising stories about how the snakes had bitten one of them, who, as a result, lost a part of his finger! The venom had also turned that finger black!

After the snake stop, we headed over to the other reptiles – lizards, some more snakes, a green anaconda. There were also quite a few tortoise, from cute, little ones to big, giant ones! My daughter couldn’t believe her eyes when she saw the giant Aldabra tortoise! We even saw some tortoises in the crocodile enclosures. Not sure how they were not eaten up by the crocs! I understand the crocs were fed regularly, so maybe they just don’t feel like chasing after food in a hard shell

After all these creatures, we finally ventured to the centre of attraction at the farm – the giant crocodiles, alligators and gharials. All sizes of crocodiles were there – from small ones to really gigantic ones. Big or small, they were all scary to look at! Some of the crocodiles were kept in small enclosures that housed 3-4 of these giants but a whole lot of others were kept in huge places with water in the middle and a wide sandy space around it. A lot of crocs were hidden in the water and a lot more were basking in the sun. The truly gigantic salt water crocodiles are another attraction at the bank. Jaws III is a super-awesome giant salt water crocodile and is the biggest crocodile in captivity in India. It measures more than 16 feet and weights about 600 kgs! Most salt water crocodiles are scary to look at and this one, scarier than most! I understand feeding Jaws III is an event worth attending, but happens on Sundays only. Oh well, another miss..

Finally, we saw a gharial in its natural habitat – swimming in a giant aquarium, among fish and tortoises. Truly, we were able to appreciate their size when we saw them at eye-level! Btw, a gharial is a crocodile-like reptile, native to India. It is a critically endangered species and is protected by law. Its significant feature is a long, thin snout that it uses to catch fish and other small prey.

And with that, I come to the end of our visit to the zoo

Now, I should get back to completing some paper jewelry orders that are long-pending!