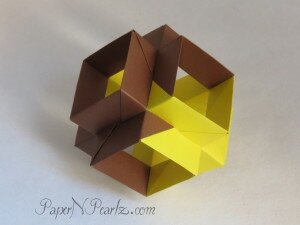 Tomoko Fuse’s book ‘Unit Origami Fantasy’ is in Japanese, so I am not able to find the name of this model! Hence the generic title for the post

As far as the model goes, this is a simple model, made from a windmill base. I used printer paper (80 gsm) for the units, which turned out pretty good for this model. I think if I had used regular 60 gsm origami paper, the model might not have been as sturdy. For a sturdier model, thicker paper such as scrapbooking paper should work well, given the simplicity of the folds and the assembly.

In general, for modular origami, I tend to go for the icosahedron assembly (30 unit assembly). But for a change, I tried the cube assembly (12 unit assembly). Each face is made from 4 modules and there are a total of 6 faces to the cube.

During assembly, I realized that the small triangular tab kinda stands out inbetween the modules. In the larger assemblies, I guess this would not be prominently visible, since the angle in the center would be smaller. So I did the easiest thing possible – glued the triangular tabs to the sides! 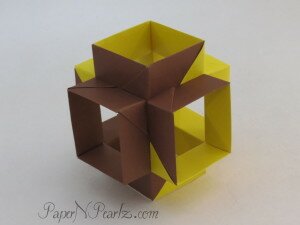